VV-898 / Programming this radio in all its varieties
The VV-898 comes in several varieties... Dual Band and tri band... version 1.07, 1.08 and beyond. The RT Systems programmers work with as many of these as we have seen and been able to identify correctly.

You, however, must use the correct programmer for your radio. Several of the programmer are distributed in one package making it possible for you to discern which one you need to install to match your particular radio.

This screen appears as part of installation of the programmer: 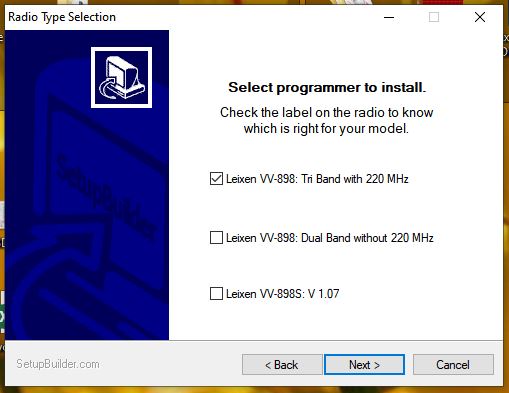 The Triband version is checked by default. If you don't have a tri-band radio... don't install this one!! This will be the result... as reported by a user....

"I am having major problems using this software. I assume it's me so PLEASE help. I've attached the uploadfile.vv898 which is what I'm trying to load. Also is attached is what I download from the radio AFTER I try to get it working... Both look about the same however when I look into the radio... I have all kinds of various frequencies such as 202.020 and when it scans it scans the whole 200 series before getting back to the originally installed freq. Also, as you can see I have 146.8800 with 3CX Click to Call"> 146.8800 programmed but the radio never scans it. Nor when I step through the channels is it loaded... I have tried about every variation of uploads/downloads/manually programming and it comes up the same way every time.... I know it'll be something simple but please help. Thank you."

When I sent his file to my radio using the tri-band program, I got the SAME results.

When I copied the frequencies from his file to one in the 1.07 program (which was right for my radio).... everything worked perfectly again.

I copied the frequencies from his file to one in the 1.07 program (which was right for my radio).... everything worked perfectly again.